SIZE RELATIVE TO A 6-FT MAN:

ABOUT THE BLUE MARLIN 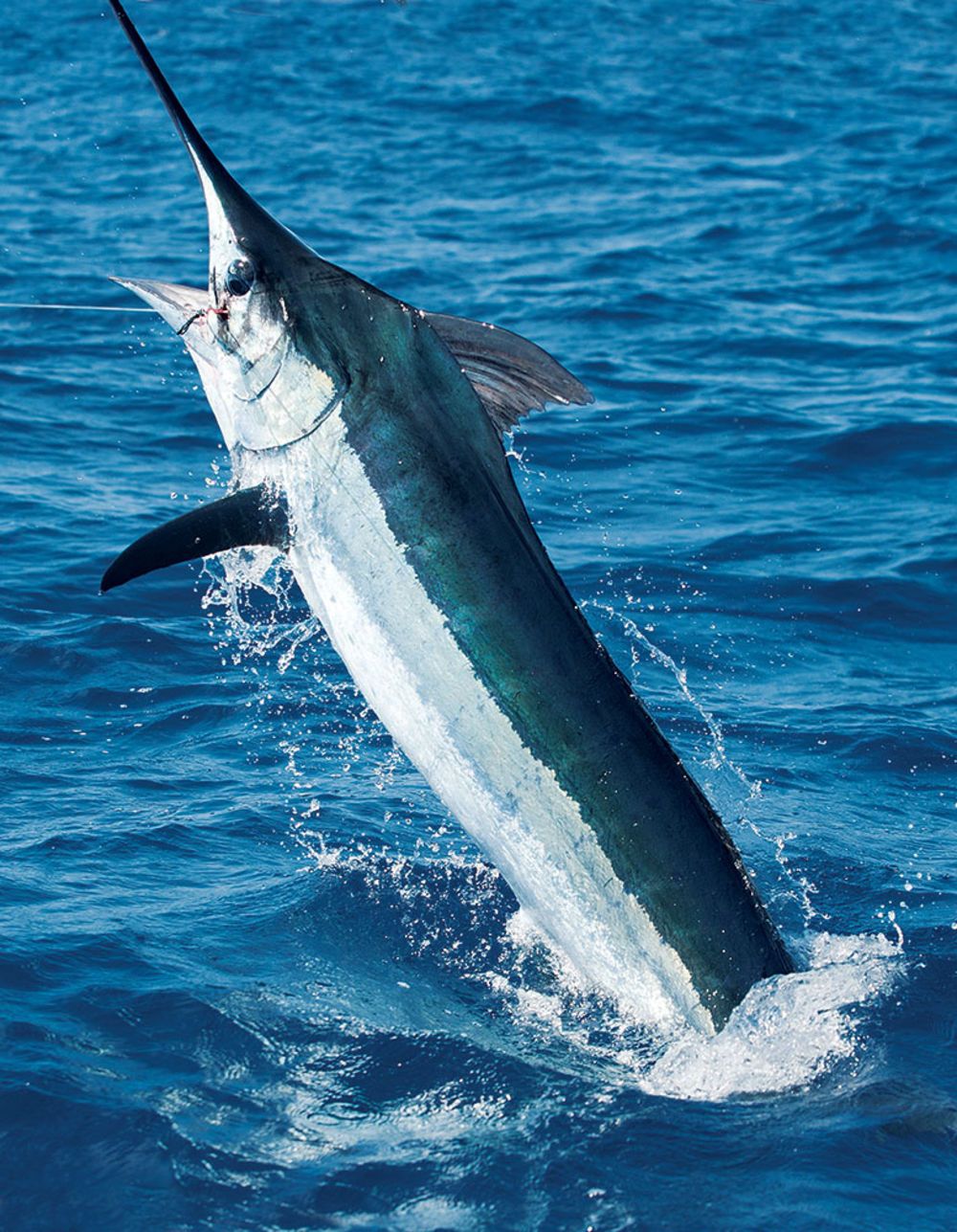 The strikingly beautiful blue marlin is the largest of the Atlantic marlins and one of the biggest fish in the world.

Females, which are significantly larger than males, can reach 14 feet in length and weigh more than 1,985 pounds. Average sizes tend to be in the range of 11 feet and 200 to 400 pounds.

Native to the tropical and temperate waters of the Atlantic, Pacific, and Indian Oceans, blue marlins are among the most recognizable of all fish. They are cobalt-blue on top and silvery-white below, with a pronounced dorsal fin and a long, lethal, spear-shaped upper jaw.

They are so-called blue-water fish, spending most of their lives far out at sea. They are also highly migratory, and will follow warm ocean currents for hundreds and even thousands of miles.

Blue marlins prefer the higher temperature of surface waters, feeding on mackerel and tuna, but will also dive deep to eat squid. They are among the fastest fish in the ocean, and use their spears to slash through dense schools, returning to eat their stunned and wounded victims.

Known for putting up a tremendous fight when hooked, these rare marine monsters are the holy grail for sport fishers. Their meat is considered a delicacy, particularly in Japan, where it is served raw as sashimi. Although not currently endangered, conservationists worry that they are being unsustainably fished, particularly in the Atlantic.

This website uses cookies to improve your experience while you navigate through the website. Out of these cookies, the cookies that are categorized as necessary are stored on your browser as they are essential for the working of basic functionalities of the website. We also use third-party cookies that help us analyze and understand how you use this website. These cookies will be stored in your browser only with your consent. You also have the option to opt-out of these cookies. But opting out of some of these cookies may have an effect on your browsing experience.
Necessary Always Enabled
Necessary cookies are absolutely essential for the website to function properly. This category only includes cookies that ensures basic functionalities and security features of the website. These cookies do not store any personal information.
Non-necessary
Any cookies that may not be particularly necessary for the website to function and is used specifically to collect user personal data via analytics, ads, other embedded contents are termed as non-necessary cookies. It is mandatory to procure user consent prior to running these cookies on your website.
SAVE & ACCEPT